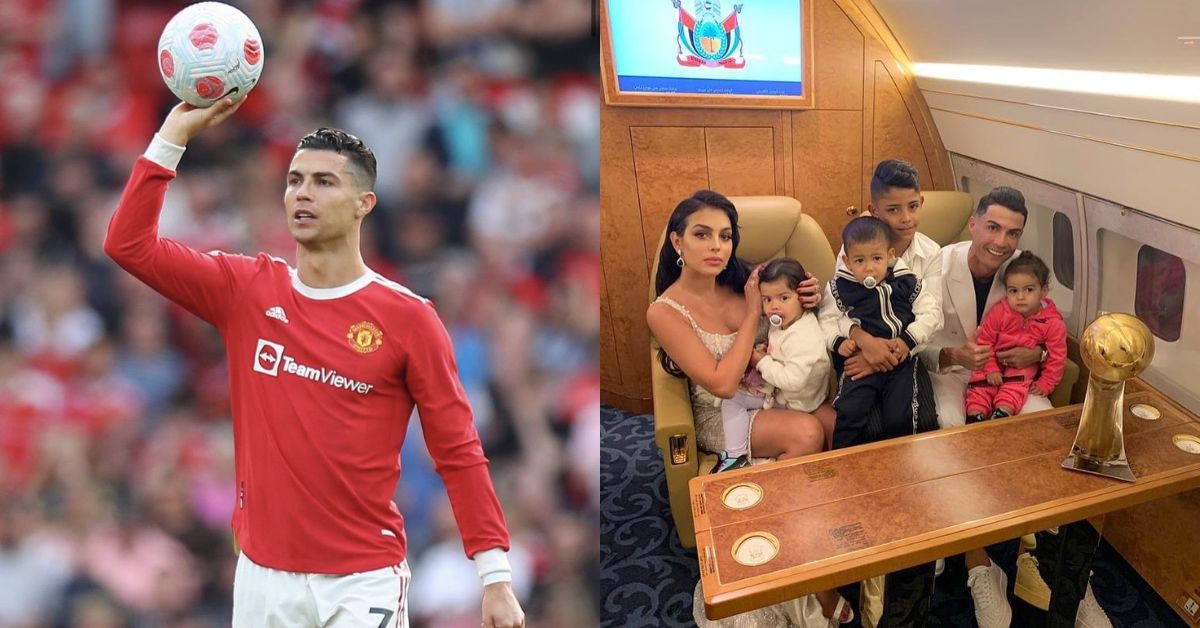 Cristiano Ronaldo is one of the greatest footballers of all time. Along with Lionel Messi, he changed the beautiful game for generations to come. Ronaldo currently plays for English club Manchester United. He joined them for the second time in 2021, having left them in 2009. During his first spell with United, Ronaldo was an absolute machine.

He impressed former United manager Sir Alex Ferguson in a friendly against them for Sporting CP. He enjoyed a successful spell in England from 2003 to 2009. Cristiano then left for Real Madrid, a dream club for many. His transfer was a record at the time, at £80m. Since then, CR7 has worked hard to become one of the greatest players of all time. He is currently the all-time leading football goalscorer with 815.

Throughout his illustrious career, the Portuguese has dated many women. From the most popular role models to the most unexpected people, Ronaldo has been with everyone. Let’s take a look at them.

When Ronaldo was young at Sporting, few people knew him. If we’re honest, he wasn’t that popular until that iconic friendly against Man Utd. During his time at the Portuguese club, Ronaldo had a teammate known as Mario Jardel. He was better than Ronaldo back then, as many would say. His gameplay was so electrifying that he was said to have mentored Cristiano at one point.

Reports state that Ronaldo was involved with his sister, Jordana Jardel in 2003. This was before he moved to England and was still a teenager in Lisbon. There have been no public appearances of the couple or images online. It seems that the couple kept their relationship well under wraps.

In 2007 or 2008, it was rumored that Ronaldo dated British actress Gemma Atkinson. She is famous for starring in one of the most famous British TV shows “Hollyoaks”. The couple appeared to have only been dating for a few months. However, Gemma opened up about her very first date with the star years later.

She told the Daily Star, “We went to my house and had cups of tea and watched Only Fools and Horses, sincerely. With Cristiano it was crazy, because wherever he went he was followed by photographers. When we parted ways, we offered me so much money to talk about him and I didn’t want that.

What Atkinson says is not at all surprising. Ronaldo has been football’s biggest star for decades. Wherever he goes, we can be sure the media is there to capture his every move.

The relationship between Ronaldo and Paris Hilton immediately started in the limelight. Just a day after he ended his relationship with Doug Reinhardt, cameras captured Paris with the footballer. This happened in June 2009, around the time Cristiano moved to Real Madrid under the famous record deal.

When asked about CR, Hilton denied a relationship between the two. She said in an interview with The Mirror, “He’s a very nice guy and an incredible athlete, we’re getting to know each other and I have to leave it at that. Cristiano and I are good friends. Very good friends.”

After Atkinson, Ronaldo also had an affair with Nereida Gallardo. The Spanish model reportedly dated him in 2008 while he was still in England. Although the duration of their relationship is unknown, it seems that she did not have a good time with the football legend.

She spoke about Ronaldo to a Spanish newspaper in 2014. Gallardo said: “He’s a cute boy with no brains. He’s arrogant, self-centered and a bit crazy. His ego is too big and he’s not smart. He’s a bad role model for kids. He’s a coward.

Although it suggests she was unhappy with Ronaldo and his behavior, she came to his defense a few years ago. In 2018, Kathryn Mayorga, an American, claimed that CR7 forced her and paid her a colossal sum for her silence.

Asked about her opinion, Nereida mentioned, “He was a courteous, warm and loving guy. He was always a gentleman to me. Cristiano treated me well while I was with him. He was never aggressive towards me – not even up close. I can’t see him forcing or holding anyone back. He’s not an aggressive guy in bed.

The Portuguese started dating Irina in 2010, just after a year of his debut season at Madrid. The couple had been in a relationship for five years. Ronaldo shot many photo shoots and commercials with Irina during this period. The couple were often called one of the most popular celebrity couples in the world. Irina was one of the best models back then and we all know how good Ronaldo was in 2015.

The couple’s relationship ended abruptly in 2015. The reasons for their breakup are still unknown. But Irina took a subtle dig at Cristiano after their split. She mentioned, “I thought I had found my ideal man, but I didn’t,” she shared. “What I look for in a man is for him to be honest. I like someone who is loyal to women… That’s the most important thing a man should have. She then had a relationship with the famous actor Bradley Cooper a little later.

It looks like Cristiano has found his wife. He met Georgina Rodriguez in 2016 while she was working at a Gucci store in Madrid. Reports say the Argentinian woman was a sales assistant for the luxury brand. Ronaldo became a frequent customer of his after they first met.

Cameras first spotted them at Disneyland Paris, although Ronaldo did his best to keep a low profile. The 28-year-old has revealed in the past how different it was with one of the biggest personalities in the world. She said in an interview, “I remember he came once in a Bugatti. My co-workers went crazy. I arrived there by bus and left in a Bugatti. People couldn’t believe it. »

Since then, Ronaldo and Georgina have attended numerous award ceremonies together and posted pictures together on social media. Cristiano even appears on his partner’s Netflix show, “I am Georgina”. She uses the show as a platform to show her rise as a model after meeting Ronaldo.

How many children does Cristiano Ronaldo have?

Cristiano’s first son, Cristiano Ronaldo Jr, is currently 12 years old. His nicknames are Cristianinho or ‘Little Cristiano’ which people gave after seeing the resemblance between him and his father. Cristiano Jr has played for football academies at several clubs including Juventus and Man Utd. He wears number 7 for United’s Under-11 team, just like his father. The teenager often shows glimpses of his father with his footballing abilities.

🔥Cristiano Ronaldo Jr. hit the ‘SIU’ after scoring for @ManUtd.

Ronaldo Jr’s mother is still unknown to the world. Reports state that Ronaldo opted for the mother not to be involved after the surrogacy process. It wasn’t the only time CR7 chose a surrogate. In June 2017, Ronaldo’s family welcomed twins Eva and Mateo through surrogacy.

The 37-year-old has only one child with his girlfriend Georgina. The child’s name is Alana Martina. Georgina gave birth to him in November 2017, the same year Ronaldo had Eva and Mateo. The twins and Little Cristiano may not be his blood children, but Rodriguez treats them all with the same love. She often posts on her social media with the kids.

This year, Georgina gave birth to another baby girl. The name of the child is still unknown but there is a tragedy that has hit Cristiano’s family. The news was that Georgina was pregnant with twins, a boy and a girl. Sadly, the baby boy did not survive childbirth and died shortly thereafter. Ronaldo announced the sad news on Twitter. Ronaldo currently has five children, two of them with Georgina.