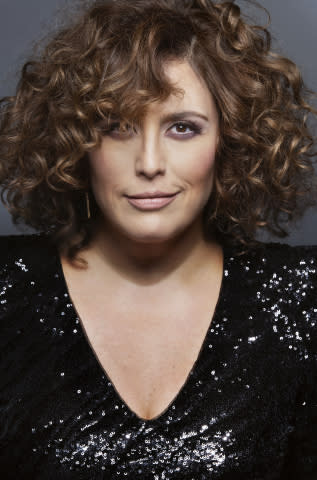 Hosted by Latin Superstar Angelica Vale – Will Singles Find Their Match Behind The Mask Or Take The Money?

Dating Behind a Mask took a turn in EstrellaTV’s new dating game show series “La Máscara del Amor” (The Mask of Love), which premiered Thursday, May 27 at 8/7 p.m. CT, and starting June 1, 2021, it will air Monday through Thursday at 9 p.m. / 8 p.m. CT. Hosted by beloved Latin actress and celebrity Angelica Vale (“La Fea Más Bella” / “Ugly Betty”), this new dating series features singles looking to find their partner – men and women and same-sex couples – or maybe just the cash prize at the end of each episode. Are they there for love or just for the money?

A dating show for the Clubhouse era, Vale takes the show’s contestants through games and challenges by five masked suitors. The contestants take on the challenges of dating their confidante Vale, but it’s ultimately up to the contestant to decide between love or money at the end of each episode.

“I am delighted to host ‘La Máscara del Amor’ and help these single men and women find true love in a fun, romantic and sexy way,” said Vale. “I have so many friends and fans who tell me how difficult it is to date them today. Coming out of the pandemic, you are still seen behind a mask and live in a closed social culture. Everyone is trying to find a way to meet someone. This series adds a playful element to meeting and knowing that special someone behind the mask, literally! “

The series is an original production of Estrella Studios and Alton River Media directed by producers Martin Halac and Carlos Cerutti.

Angélica Vale is a multi-talented artist (singer, actress, comedian, playwright, voiceover and celebrity impersonator) from one of Mexico’s most iconic entertainment royals. She is the daughter of legendary actress and singer Angélica María, “Mexico’s Timeless Sweetheart”, and talented artist (singer, actor, comedian) Raul Vale. She is also the granddaughter of internationally renowned producer, director and screenwriter Angélica Ortiz. She began her career in the entertainment industry at the age of two. Since then, his career credits include over 30 theatrical productions, nine feature films, over 250 television productions across Latin America and the United States, including the hit telenovela “La Fea Más Bella”, the Mexican Ugly Betty. In 2007, she made an appearance in the Ugly Betty season finale on ABC. As a musical artist, she started recording at the age of four and to this day she has participated in musical theater as a composer and performer and has had a successful musical career as a solo artist. Most recently, she added the role of radio personality to her impressive list of accomplishments at a local Latin pop / reggaeton station in Los Angeles.

Estrella Media, Inc. is a leading Spanish-language media company that creates video and audio content for cross-platform distribution in the United States and around the world. Estrella Media is one of America’s largest producers of Spanish-language video content, producing more than 6,000 hours per year of news and entertainment programming at its Estrella studios. It has a library of over 20,000 hours of original entertainment programs.

Estrella Media is also a leading producer of audio programs and events in Spanish. The company’s Don Cheto radio network features one of the country’s most popular radio talent. Estrella Media’s highly rated radio programming is broadcast on its radio stations in major US Hispanic markets and broadcast on digital media platforms. Estrella also produces large-scale music festivals, concerts and special events across the United States.